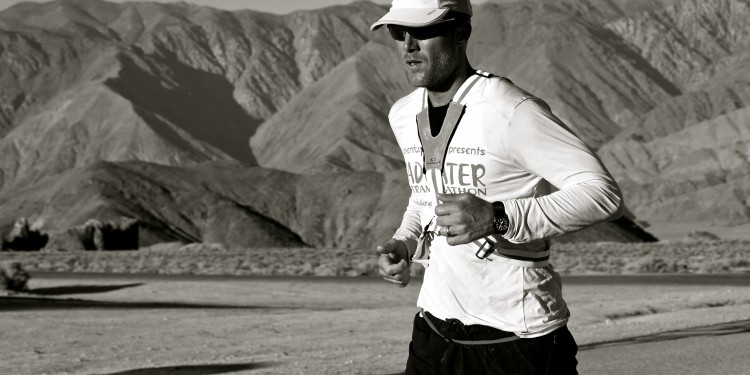 Everyone has their own interpretation of what being fit is. For some it matters how strong they are, others how fast and then there are endurance athletes. Of course it takes a great deal of muscular endurance but more than anything it takes mental strength. This past month Lane Vogel flexed his mental muscles. While battling the flu, he conquered the Badwater Ultra-Marathon for the second time, enduring 135 miles of shoe melting asphalt, from Death Valley, CA (elev. 282 feet below sea level) through three mountain ranges, to Mt. Whitney, CA (elev. 8360 feet) and that’s why this month Lane is 904’s Fittest. We caught up with Lane after the event to find out a little bit more about his experience.

Badwater isn’t a race you can just sign up for and run, only 100 competitors are invited each year. What are the qualifications to even be considered as a potential competitor in the race?

The race is application only and they have qualifying standards in order to make sure the most experienced people come to race. The qualifying standards for Badwater are that you have either done Badwater before, completed three 100 mile races previously and at least one substantial ultra-marathon within one calendar year of application. It is also highly recommended that you have crewed for another runner at Badwater. Also highly recommended is participation in other ultra-sports, such as Ironman, Double, Triple Ironman, ultra cycling, and multi day stage racing. The more you have on your resume, the more likely you are to be accepted.

Yeah, this year we had Amy Costa and Linda Quirk, last two years we also had Chris Roman and my lovely wife Jennifer Vogel in 2011. The ultra-running community is really small everyone knows one another.

Jacksonville seems to have an abundance of world class endurance athletes, what would you attribute this to considering our lack of terrain?

Yeah, Jax is like the Boulder of the South! For some reason there is a wealth of stellar athletes congregating here! From cyclists, to runners, to triathletes, the place is loaded with knowledge and expertise. Why they are here? Couldn’t tell you, Jacksonville just got lucky I suppose.

Do you happen to know the did not finish rate? I heard it was pretty high.

This was the highest year for DNF’s that I can recall. I believe there were 15 DNF’s this year when normally there are less than 5. Athletes doing Badwater just don’t walk in and start the race. Many Badwater veterans were commenting about how hard this year was. For me especially it was much harder due to my illness, but it’s Badwater…it’s going to be hot, and seriously windy but that’s what people sign up for when they toe the line.

How do you prepare mentally?

There really is nothing to prepare you other than having been in that situation before. There is no book, no story to hear, no plan to go by. Race preparation can be lost in an instant, for example this year I was in perfect health before the race and two days prior I came down with the flu, which progressed into Bronchitis during the race. Mentally, even starting the race was a struggle and continuing on feeling the way I did was the most grueling mental challenge I have had to date.

Did you have any mental breakdowns during the race where you didn’t think you were going to finish?

Sure, there were times that I couldn’t breathe, my throat was so swollen and air passages were blocked with pieces of scab from my esophagus and I thought I couldn’t continue. There were times that the blisters hurt so bad I didn’t know if I could move forward another inch. You never know you’re going to finish until you cross the tape! I just did what I had to do. I had to keep moving, I had to run when I could, at whatever pace I could. I played the reflector game, run from one reflector to the next then power walk. I had to put the pain to the back of my brain and just make it happen. Badwater is a commitment to not only yourself but those who support you out there as well. I didn’t want to let my crew down either, they also made major sacrifices to be there.

A large amount of the population wouldn’t even consider such a race, even those who do would have it as a bucket list type of thing that they’d do once. What made you go back?

This year I am planning on doing the “Death Valley Cup” which is Badwater 135 in July and then the Furnace Creek 508 in October. The 508 is a bike race with 35,000 ft of elevation gain that starts in southern California, makes its way through Death Valley and spits you out in 29 Palms California. My sole reason for going back was to do the Cup, to see if I could handle the challenge.

How do you train for something like this… how is it different than marathon training?

Incline treadmill repeats, stair mill repeats, lots of running obviously, cycling, a ton of core work and yoga. The running distances are longer than marathon training, but everyone trains differently. I happen to not do lots of long runs, I focus more on speed work and mix in a handful of longer (like 40 mile) runs in one day a week. I make a game of it, I will run from Mandarin where we live to downtown and do bridge repeats and see how many I can do in a certain time, then run back home.

No. I personally don’t sleep, but I have heard that some people take little cat naps during the race.

What do you eat in a race like that and in training?

Given the extreme heat of the race, it is hard for me to take in solid food. I do mostly gels and took in roughly 100 during the race in addition to juices, sodas and coconut water. At home I eat a clean, mostly a locally sourced diet of vegetables, fruit, meat, etc. The salad bar at Native Sun is a standard go to on busy days.

Do you plan to compete again next year?

No. Absolutely not. I finished; I didn’t accomplish the goal I had in my head… but then again I was sick. Regardless of the time I wanted, a finish was really all I could hope for this year.

I don’t blame you. Congratulations again to you and all of the other Badwater competitors and good luck at the Furnace Creek 508.

The Dark and Early Runners