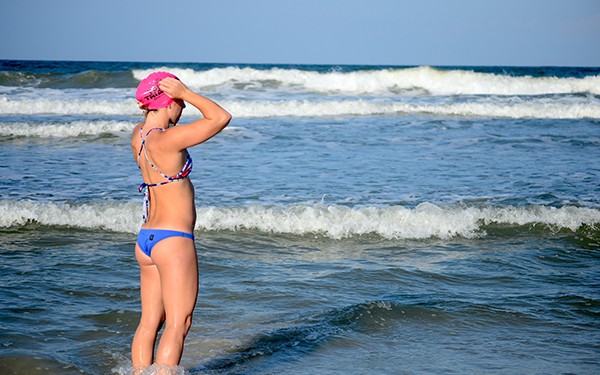 Second only to walking, swimming is the most popular recreational activity in the US.  While swimming can be meditative, not all of us are looking for a tame experience in the water.  Local swimmer and triathlete, Teale Beckenbach is not only looking for remarkable upstream experiences but is finding them in the ocean, a sometimes challenging and hostile environment.
For Teale, a watery bond began early with surfing. Surfing encouraged the sense of adventure that has helped her thrash through waves and people in open water swims.

Swimming doesn’t come without challenges though.  In her interview with 904Fitness, Teale talks about how she’s channeled her fear and joy of open water swimming, and how her physical and mental training prompted her dad to do the same.

Aimed at the exploding ranks of triathletes and swimmers escaping the confines of the pool, Teale shares logistical tips how to use the anxious energy in a race and how to enjoy the process of training as much as the end result.

[foogallery id=”3064″]
JB:  For a girl who grew up on the water, how is swimming your weakest sport?

TB:   I never took the time to learn how to do organized swimming. Swimming freestyle, and swimming for fun are two totally different beasts.

JB:  How did you make the jump from competitive surfing to triathlon?

TB:  That was quite the transition!  After I won ESA Easterns, I did a 6-month study abroad in Spain where I really didn’t surf and instead started running. One of my roommates was part of the University of North Florida Tri Club and he encouraged me to check it out.  When I returned from Spain and tried to compete in surf contests, I wasn’t loving competing in that sport.  So I ran a couple half marathons and didn’t really love that either.   I finally decided to take my buddy up and check out the UNF Tri Club.  I’m now going into my second year competing in this sport!

JB:  A lot of swimmers face their biggest challenges in open water swims. Do you think your comfort in the ocean is an advantage?

TB:  Yes and no.  I remember my first swim in a triathlon, getting climbed on, kicked in the face, trying to get to that buoy, and feeling like I was having a panic attack. However, if we are sent out and it’s choppy and there are bigger waves breaking, I find that I am calmer than most because I am used to being in those conditions, even if on a board.

JB:  How do you train to overcome your weaknesses in swimming?

TB:  I practice a lot and I try to train with people faster than me. It definitely is not my favorite thing to practice because it does not come easy, and I am not great at it. When I was training for my half ironman, I swam with my boyfriend and a group of St. Johns Lifeguards in St. Augustine three to four days a week.  Now I swim with the masters group at Episcopal three days a week, plus ocean swims on the weekends when the water is tame.  It takes regular practice.

JB:  What advice would you give to swimmers anxious about open water?

TB:  Get in the water 15 minutes before start time, get comfortable, do some strokes, get your breathing under control. Then when the gun goes off, go out slowly, hang back or on the outside of the crowd.  This will help you stay calm the whole swim and get into a rhythm.

JB:  What goes through your head while you are swimming 1.2 miles?

TB:  When getting to the first buoy, I’m trying to determine where I was seated in the crowd of people.  Once I get into a rhythm, I keep an eye out for other pink-capped women.  I then start to think about how the bike will go, breathing rhythmically, and even making a point to look at fish if the water is clear.

JB:  You have such a cheerful and laidback personality!  How do you relate with all the type A personalities in competitive sports?

TB:  I do, except for when I am competing. I relate to type A personalities from the standpoint that I am highly competitive and have fun performing well, but that’s really the whole reason I play this sport is to have fun.
JB:  What do you eat before a long swim workout?

TB:  I really don’t eat anything right before a long swim workout.  I might drink some watered down Gatorade throughout the swim, and then feast afterward. If I have to run or bike right afterward, I will try to pack a snack and eat a cliff bar or something of substance other than a Gu.

While Teale races to win, she hasn’t lost touch with those of just trying to get our feet wet in sports.  When she did end up finding a place on the podium it would have been easy to shrug off family and friend’s comments on her training intensity.  Instead, Teale has used her excitement to encourage others to chip away at the fear of putting themselves out there, whether it be on a race course or in the ocean. 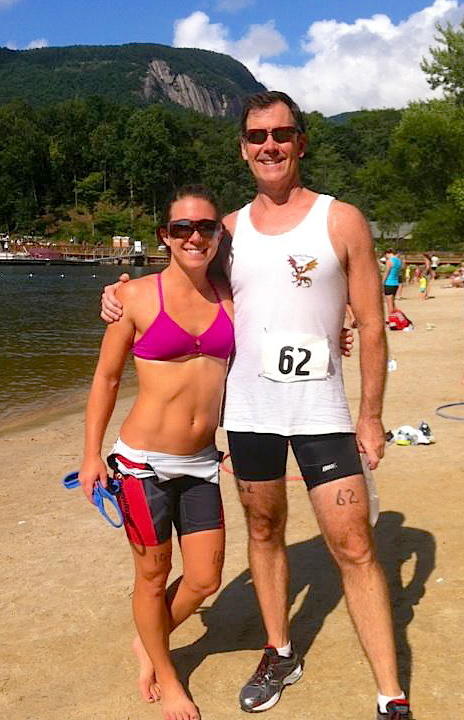 Teale recently convinced her Dad to compete in an olympic triathlon. As a former athlete, the competition of triathlon appealed to him, so it wasn’t a hard sell.  The training was a good way to help him get into a routine and get back in shape.  “I would give him no choice but to work out so he could complete the race. At the end of training, he said he was going to make it a goal to finish top three in his age group! (Although, he too struggles with the swim…haha).” – Teale

Like father, like daughter or like daughter, like father? Inspiration has been a shared gift, passing hands throughout the years. “My dad has always supported me in this sport, but I think that my passion about triathlon has really gotten him back into the active things he used to enjoy. It’s been fun because he constantly calls and tells me how much faster he has gotten on the bike, or that he is able to run his 5k at a faster pace than last week. It’s something we both share which makes triathlon even more enjoyable.”- Teale