April Martin: Running for a Reason 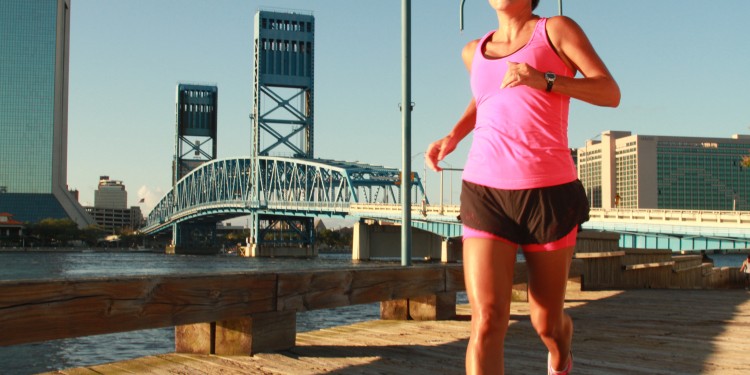 What do you do when you feel too small against an opponent who seems to be the giant puppeteer controlling your every move? When your motivation dwindles and you feel hopeless? For April Martin, an avid runner who was diagnosed with Crohn’s disease eleven years ago, the answer is to refocus and face that giant head on. However, that determination did not come without a struggle.

Not knowing much about the disease when diagnosed at the age of 25, April didn’t realize the journey that she would endure and where her future as a runner stood. She began running as early as elementary school, encouraged by her father who shared the same passion. She ran half marathons, completed triathlons, and coached Track and Field at the high school where she taught. She was afraid of what was in store as someone who had to live with Crohn’s, a disease that affects the digestive track and can lead to inflammation and pain within the body.

Since being diagnosed in October of 2001, April has endured five major and a few minor surgeries. “I have had things cut out, removed, suspended, and put back together,” she says.

In 2007, after a minor surgery to remove some adhesions, her small intestine burst open. Unaware of the severity, April waited three days before returning to the hospital. “The following night, I had what I would later learn was a life-saving surgery. The surgeon didn’t expect me to make it,” April says.

This was her most challenging time with the disease, she watched her muscles deteriorate and her body shed 25 pounds right before her eyes. She felt helpless.
After this battle, her love and dedication for running deteriorated along with her strength.

April didn’t think about running for six months and found herself starting over from scratch. Being the high school’s running coach, she found her job of motivating her students a struggle and realized that she was the one who needed the motivation. She found that drive in her students. “A little over a year prior to that I had run my first marathon and now I could barely run two miles,” April says. “I remember one of my girls coming back to get me when she was finished, telling me I could do it. Talk about a humbling experience.”

This led to a recommitment in her passion for running and she was determined to not lie down and let this disease win. Instead, she decided to fight. “Since then, running and any sort of physical exercise is that much more important to me,” April says. She made a promise to never take the ability to run for granted from that point on.

Though it took some time, April got back into shape. She found her inspiration in running, teaching zumba, coaching, and competing in triathlons. She decided to run not only for herself, but for those affected by the disease who can’t.

April also became involved with the Crohn’s and Colitis Foundation of America’s Jacksonville chapter in 2008. The Foundation has many programs that raise awareness about the disease and empower those who are living with it. Team Challenge is one particular program that April immediately found a special place in her heart for. This program sheds light on the disease while raising money in the process. Teams participate in half -marathon training and fundraising. “It was like it was especially made for me,” she says. “It combined one of the things I love with the challenge of fundraising.” 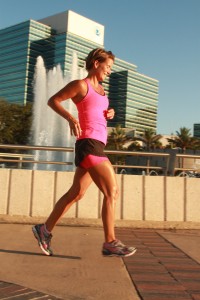 She was asked to be the coach of the North Florida team and will never forget the experience of seeing her team cross the finish line after completing the full 13.1 miles. “Most of our team had never run a half marathon before and it was just so awesome watching them and encouraging them,” she says.

Through CCFA’s organization April wants to bring hope to those who are affected by the disease and feel hopeless as she once did. She’s touched by those who participate in the organization and run for a cure, even though some are not personally connected to the disease. “I am so thankful for them because they are raising money to find a cure for me and everybody else who suffers from these diseases,” she says.

April is looking forward to preparing her team for the Winter season where they will participate in the Rock ’n’ Roll ½ marathon in Las Vegas. She will continue pushing forward despite the challenges this disease puts in her path. She is excited to coach, teach, run, and live.

“I have far more determination than I have talent or energy. I don’t know how to give up,” April says. “It may not always be pretty or graceful but I will fight as long as God allows me to. He is clearly not finished with me.”

If you or someone you know is living with Crohn’s disease or Ulcerative Colitis, please visit: www.ccfa.org.

If you are interested in learning more about how you can join North Florida’s chapter visit: www.ccteamchallenge.org or email team manager, Heather, at hthurston@ccffa.org.

Tired of Cycling Alone? A Guide to Jacksonville Cycling Groups