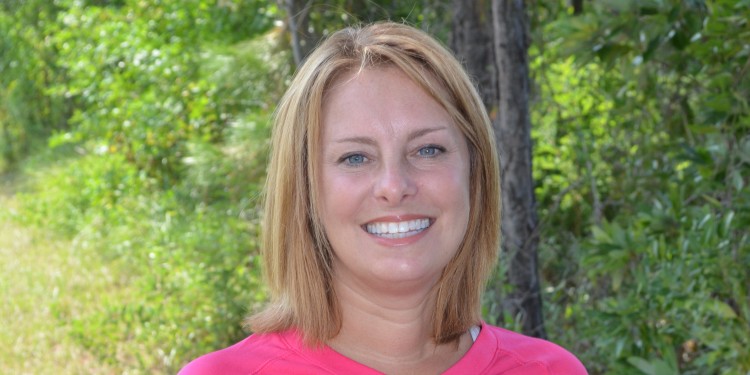 It was October 25, 2003. The Komen North Florida Race for the Cure was underway at the University of North Florida campus. Thirty-four year old, Kristie Naines was suffering. All she wanted to do was run the entire way and finish the race. She didn’t care what her time was, because this race was different than the others. This was her first race after six months of traditional chemotherapy. This time she was running as a breast-less breast cancer Survivor.

Pre-pregnancy, Kristie spent her adult life running and practicing yoga. She had a healthy pregnancy, yet with a minor red flag. She started expressing milk during the pregnancy. Her doctor reassured her that although it was unusual, it wasn’t that bad. She gave birth to a healthy baby girl in October 2001. Once her daughter was born, though, she noticed several lumps in her left breast. Two misread mammograms, several misdiagnoses and an entire year and a half later, she was told she had breast cancer. That dreaded diagnosis came in March 2003, right after she ran the Gate River Run and a month before her 34th birthday.

After having a double mastectomy in early April 2003, it was time to find that elusive treatment. Kristie had a daughter to raise, and she wasn’t going to accept her cancer as a death sentence. She meet with several doctors that told her the chance of survival was 30%; one even told her that she’d be great for his trial so that her results could help the women who were diagnosed once she was gone.

Those words were unacceptable.

Finally, she heard about a trial going on at Mayo Clinic. Edith A. Perez, M.D. was spearheading a trial that was directed specifically at HER2-positive breast cancer. Dr. Perez told Kristie that since she was cancer free after her double mastectomy, she would help her remain cancer free. 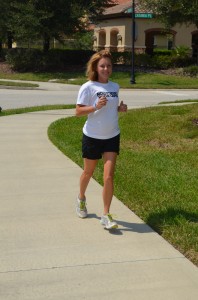 Kristie immediately began a traditional chemotherapy that would last six months, in conjunction with radiation for 45 days. The trial at Mayo Clinic placed her on a new drug called Trastuzumab (Herceptin). According to mayoclinic.com, Trastuzumab, specifically targets HER2, kills these cancer cells and decreases the risk of recurrence. Trastuzumab is often used with chemotherapy. Kristie took Herceptin religiously every week for one year.

Once Kristie began her treatment regime, she took up running again. She lost her hair and some weight, but she didn’t loose her desire to be healthy.

In December 2005, after six months, Kristie ran the Jacksonville Bank Marathon. She ran medication free. Kristie’s quest to be healthy and regain strength continued even after a new breast replacement surgery. In January 2006, she had Diep Flap reconstructive surgery, which involves taking part of her stomach muscle and tissue to rebuild her breasts. Since then she has run at least 15 half marathons, the New York City Marathon and all five 26.2 with Donna The National Marathon to Finish Breast Cancer runs alternating between the full and the half.

Raised in Jacksonville, Kristie is a Terry Parker High School and Jacksonville University graduate. She now works for Mayo Clinic as the Principal Gifts Officer. She has yearly check up’s where they check her blood and her ankles, though she’s not sure why they do that. Kristie continues to workout daily. She still runs, and has also competed in a few triathlons. She practices yoga and walks the dog with her 11-year-old daughter. Kristie realizes each day is a gift. Her eating habits have changed over the years – she mostly sticks with hormone-free foods and limits her sugar intake. At age 24, Kristie’s daughter will be tested for breast cancer, 10 years earlier than her diagnosis.

Kristie’s advice is to, “trust your gut when you know something’s wrong.” She kept going even when doctors told her the cancer would beat her. She had it beaten when she crossed that finish line in October 2003 and at every race every year since.

Staying Healthy and Active After Your Pregnancy