Daryl Walker: Forsight for a Goal 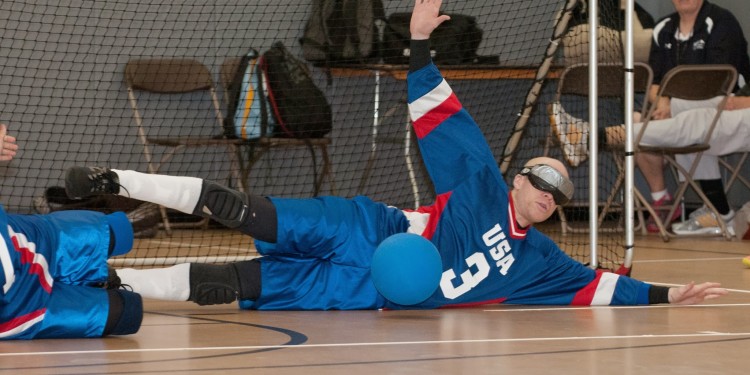 Despite limitations, there’s always opportunity for competition. Ironically, we often face our greatest limitations when competing with ourselves. Although Daryl Walker is nearly 6 feet tall and hits the court almost every day, he has never competed against Michael Jordan, Kobe Bryant or Vince Carter. In fact, the day he realized he would never compete on the basketball court was a sad day. Daryl is legally blind and suffers from a light sensitivity disorder. He was in elementary school when these disabilities came between him and his passion for sports.

Daryl isn’t the type to stay in disappointment. As a kid, he decided to get in shape for the sports he loved, even if he couldn’t participate in them. He built endurance through cross country running and strength though weight lifting. When he attended the Florida School for Deaf and Blind, he discovered a secret that has carried him through a career in disabled sports – it is “whining” and not disability that keeps us from realizing our dreams.

Daryl is now a semi pro goalball player with the Atlanta Force goalball team. He brings to the team more than extraordinary talent for the sport. He brings an attitude of support and brotherhood. While goalball gained some recognition after the 1976 Paralympic games, Daryl recognized that his fellow players were in need of affirmation. His constant encouragement – “Don’t let your disability stand in the way of anything…being a mechanical engineer, teacher, Olympian. Do what is possible! Don’t downplay what you CAN do!” If you ask Daryl about his dreams, what is possible, he’ll share that it all comes down to service to others. “Whether through goalball or not, my one true calling is service to others,” he says.

Daryl’s Atlanta Force team is top ranked in the nation. While he is considered an exceptional player, his role as “brother” and friend probably has a lot to do with the team’s ranking. His priority is to his brother teammates. While a lot of people refer to an opposing players as the “enemy”, Daryl responds, “We are not the army here…we are all goalball”. “If we can help each other, make true competition about overcoming our own personal obstacles, maybe we could level the playing field. I’d love to see scores like 5-4 instead of 10-1; this means we are collectively improving.”

In 1946 Austria, Goalball was a team sport designed for blind athletes, originally as a means of rehabilitating the visually impaired post WWII. Goalball evolved into a competitive game during the 1950’s and 60’s, eventually nominated as a paralympic sport in the 1976 Toronto Summer Paralympics. In the 1980’s it became the first paralympic sport exclusively for disabled players.

Participants compete in teams of three, and try to throw a ball that has bells embedded in it into the opponents’ goal. Teams alternate throwing or rolling the ball from one end of the playing area to the other, and players remain in the area of their own goal in both defense and attack. Players must use the sound of the bell to judge the position and movement of the ball. Blindfolds allow partially sighted players to compete on an equal footing with blind players.