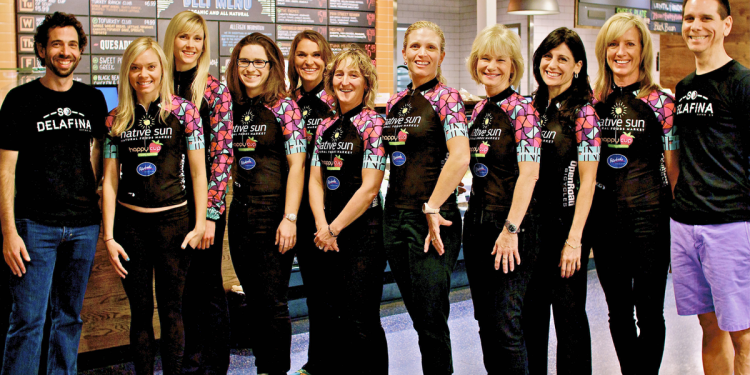 If you’re lucky, you might catch a glimpse of a uniquely pink peloton around town racing the sunset. After attending Delafina’s launch party on March 7 at Open Road however, I’m sure these extraordinary women cyclists and their supporters will be hard to miss. The excitement of this women’s only racing team is contagious and long overdue.

Delafina is the brainchild of Ralph Teten, owner of Open Road, Jacksonville Beach. A lifetime in bike racing has taught Ralph how to spot champions. He knew these women had been cycling athletes in Jacksonville for years, and just needed someone to organize them. From the start, Ralph wanted Delafina to be more than just a team that gets sponsorship dollars and goes racing. “Been there done that,” he jokes. The serious truth though – traditional sponsorship often means very little for local business.

Local sponsors, like Native Sun and Happy Cup, quickly signed on to the idea of promoting women’s fitness. Businesses are looking to separate themselves from the pack, and Ralph’s vision of 2 way bike lane is different. Looking out for teammates doesn’t just apply to cycling. The Delafina women understand how lucky they are to have local sponsorship and they are ready to spread the word.

Happy Cup’s owner, Aaron Levine thinks that sponsoring Delafina is the right move for his business as well as women’s fitness. “Women who want to eat well and exercise are my target market,” Aaron says. When it comes to talking about buying products and buying, women are the movers and shakers.

Posing for a team photo, the girls stand, arms interlocked. Partnership and community is visible. In the center is Scott Gross, Owner of the Open Road brand and Delafina’s beaming coach. He’s proud of the team so far because women are still struggling for sponsorship and recognition nationally. “There’s a big disparity between men and women when it comes to competitive cycling,” Gross shares. When he says that women cyclists have untapped potential, I believe him. Gross is paternal and admiring. It probably has something to with women who cycle for the love of the sport, regardless of money and equipment.

While I’ve seen a few male cyclists with smooth legs and bright lycra, it always surprises me how intimidating and isolating competitive cycling can be for women. All the macho bluster can turn off anyone wanting to take cycling to the next level. The truth is, men and women do things differently. For men, life can be survival of the fittest. For women training with men, even cycling can feel Darwinian – if you can’t hang, you’re on your own. Allie Norman, who started out riding with guys, recalls pulling over to change a flat on a new route, while her group rode on commenting “every man for himself”.

In terms of racing, cycling and sponsorships, the team is riding on wheels of change. Delafina is the only exclusively female bike racing team in North Florida, and the team not only represents a supportive entry into competition but women’s cycling in general.

Delafina’s overall goal – to win races. Beyond that, it’s pretty clear that Ralph, Scott, sponsors and the girls want to see less ink on jerseys and print and more women on bikes. For now, however, it’s the printer’s ink announcing to women that the roads are open.

Tips for Women New to Cycling

Don’t wear lip gloss. You’ll end up with a shade of flies and dust on your mouth

Not Just A Diet