Down Dogs for A Cause 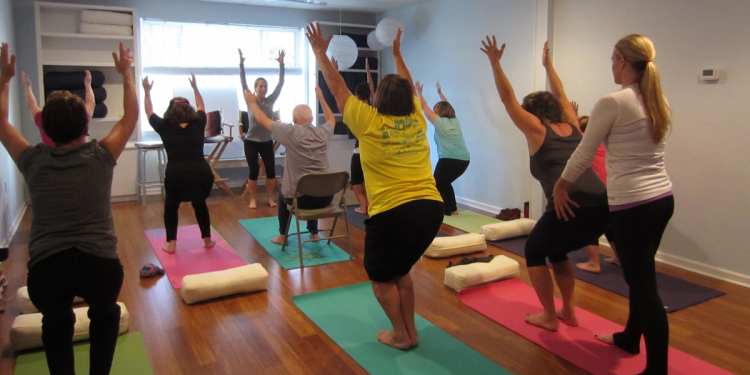 Megan Weigel is a Doctor of Nursing Practice, specializing in Multiple Sclerosis (MS), and like many women in this community, she is also a yogi. In 2010, Megan attended a MS Society Luncheon and was introduced to Cheryl Russell. Little did these women know that two years later, they would be championing Jacksonville’s first-ever MS yoga program.

Following the introduction at the MS Society luncheon, Megan and Cheryl realized they were both in the process of teacher training for yoga, with the common goal of wanting to teach yoga to people with multiple sclerosis.

Months later, the two ran into each other at a Master Class with Baron Baptiste at Big Fish Yoga – both women knew it was fate. “We looked at each other and said, ‘we are going to do this!’ and the rest was history, says Megan.

Megan’s interaction with patients on a day to day basis inspired her to become a yoga teacher so she could teach yoga to MS patients. Cheryl was diagnosed with MS in 2010; her MS symptoms are primarily related to vision, and have been well managed with disease-modifying medication. She receives annual MRI’s to monitor the progression of her disease and has very little side effects to the treatments she receives. As a MS patient, Cheryl is very aware of the benefits linked between yoga and MS. There is a paucity of research on yoga and MS in the scientific literature and it suggests improvement with fatigue, anxiety, pain, spasticity, bowel and bladder function, and balance. Megan and Cheryl’s students have confirmed these benefits in addition to increased confidence and a sense of community and togetherness.

Coupled with the desire to teach yoga and their personal connection to MS, Megan and Cheryl were also inspired by Baron Baptiste’s US tour a few years prior, where he traveled the world teaching yoga to MS patients. Following the Master Class, Megan wrote a grant to the MS Society asking for funding to start a MS Yoga class and the rest is history. The National Multiple Sclerosis Society’s local chapter issued a generous grant, which has funded the program for the past two years as well as covered equipment for studios starting up and the usage fee for students. All of the MS Yoga teachers are volunteers.

Megan and Cheryl launched MS Yoga in October 2012 and recently named their creation oMS Yoga. The goal of oMS Yoga is to awaken potential, empower confidence, and inspire possibilities in lives of people living with MS through yoga.

The duo offer MS Yoga at Big Fish on Wednesdays from 5:30-6:30PM, at Hot Spot Power Yoga in San Marco on Saturdays from 5:30-6:30 PM, and will be starting a class at MBody’s Southside studio later this month.  All classes go in 6-week blocks, with 2 weeks in between each session, and students can come to one, some, or all of the classes.

In addition to MS Yoga; Megan and Cheryl exercise their passion for fighting MS by participating in MuckFest MS, a mucky romp through mud and obstacles in support of a world free of multiple sclerosis. For the fifth year in a row, Cheryl, her family, and friends, including Megan, are participating in this year’s MuckFest MS on March 22 at the Jacksonville Equestrian Center as team ‘Mud Up With Dat.”

In the end, both women do all of it for the fun, but know they’re truly helping people with MS. So what if they get a little dirty along the way? MS affects more than 2.3 million people worldwide, every effort these women are putting forth makes it worth every yoga class and mucky run.

Benefits and Risk in Exercise