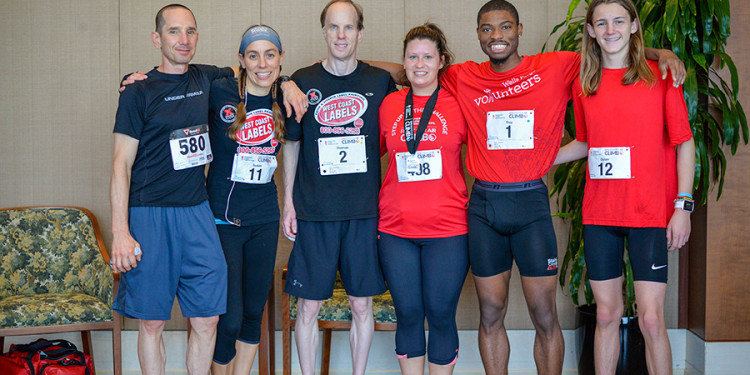 Jacksonville, FL– The 2016 Fight for Air Climb hosted by the American Lung Association featured more than 350 climbers racing up 42 flights of stairs of the Bank of America Tower in downtown Jacksonville. This annual event raises funds to support research, education and patient programs to help the millions of Americans impacted by asthma, COPD, lung cancer, air pollution and other lung diseases. Participants include friends, family and co-workers who want to raise awareness about lung health. This year, the first and second place winners who completed the Fight for Air Climb were awarded a $500 cash prize. Both winners, who are devoted supporters of the event, opted to waive a large portion of the winnings to go back to the American Lung Association.

Winning the race overall was Troy Alston, 27, setting a course record with a time of 4.24. Alston has participated in the Jacksonville Fight for Air Climb every year since 2011. This was his fifth victory as the fastest climber overall. Each year, he graciously accepts his trophy, believing strongly that, “every individual should constantly be trying to improve themselves because we have so much untapped potential.”

To prepare himself for event day he trains regularly. He attends weekly training sessions in the months leading up to the Climb, organized by the American Lung Association. He is also an avid runner and finds unique ways to train on “steps” throughout Jacksonville, like climbing stadium bleachers. He even makes time in his schedule to travel to Gainesville to get some stairs in at the Ben Hill Griffin Stadium, home of the Gators at the University of Florida. Preparation and training is the secret to his success, although it is no secret how successful he is as an elite climber.

Alston recently competed in the 2016 Empire State Run-Up in New York City. He was invited to participate in this prestigious event as one of the top elite climbers from around the world. He placed 10th overall in the race with a time of 13.03 and placed 1st male in his age category.

“Hard work will always pay off. Sometimes it will take a little time for it to fully develop, but when it finally does, the results of what you worked for is mind blowing, if you worked for such results. Remember, you get what you give!”

You can follow Alston on Instagram, his username is: rrunner87. His posts are inspiring, as you get to witness his experience as an elite climber and follow his journey with his participation in climbs and tower runs both nationally an internationally. On February 28th, Alston will be competing for the first time in the United States Stair Climb Championship race in Las Vegas, Nevada. The race will take place at the Stratosphere Tower, which spans 1,149 ft. Alston will also be competing in a distinguished tower run on April 16th in Niagara Falls, Canada at the Skylon Tower which will also be his first time competing. With this participation he has the potential to be named the first American to win an international climb.

About the American Lung Association

Exercise Is an Extraordinary 'Drug,' So Why Aren't Physicians Prescribing It?