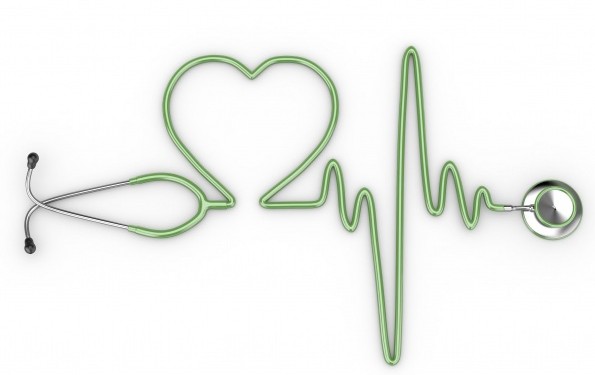 Exercise is an important component for a healthy lifestyle. Unfortunately in some cases, abnormal heart rhythms, called arrhythmias in medical jargon, can be associated with exercise or make it difficult to exercise. Several famous athletes including Reggie Lewis, Hank Gathers, Mario Lemieux, and Hakeem Olajuwan have had arrhythmias that required advanced cardiac treatment and in some cases led to a tragic death. However, arrhythmias can be an important issue for everyone who exercises from the “weekend warrior” to the “exercise junkie.”

Basic principles? Sounds too much like a textbook rather than a magazine to be savored on a late Saturday afternoon after a day of exercise. But bear with me, before we can talk about the important relationships between the heart and exercise we need to have a basic understanding of how blood is pumped throughout our bodies (Figure 1 see below). The heart is important for pumping “blue” blood from our body to the lungs where the blood becomes enriched with oxygen, while at the same time pumping oxygen-rich “red” blood to the rest of our body where the oxygen can be used by our muscles and brains. The heart has four chambers, with two on the right and two on the left. The two right sided chambers are responsible for pumping blood to the lungs and the two left sided chambers pump blood to our bodies. The two chambers on each side of the heart are divided into an upper chamber called the atrium and a lower chamber called the ventricle.

Are you confused yet? Remember that medical school is four years after college, and to become a cardiologist takes an additional six to seven years of learning (I was a particularly slow learner and required eight years). Hopefully the concepts will become clearer as we talk about the effects of exercise.

Exercise has wonderful effects on the heart. Over time the heart is able to pump more blood with each beat and require less energy to beat. With exercise, release of adrenalin causes the heart rate to increase to respond to the increased demand from the muscles of the body. Although adrenalin is extremely useful, in some cases too much adrenalin can lead to the development of abnormal rhythms. This is the reason that the most severe arrhythmias observed in athletes occurs either at peak exercise or the first 20-30 minutes after exercise stops.

Although arrhythmias can occur with exercise, it is important to emphasize that generally severe arrhythmias due to exercise are quite uncommon. Arrhythmias more common in people who have abnormal hearts and arrhythmias in patients with abnormal hearts are more likely to be associated with death. Both Reggie Lewis and Hank Gathers had a genetic condition that caused abnormal thickening of their heart muscle. Unfortunately, this condition, called “hypertrophic cardiomyopathy,” can cause sudden death due to the development of fast abnormal heart rhythms. The most common abnormality of the heart is narrowing or blockage of the coronary arteries that supply blood to the heart (Figure 2 see below). Development of blockages or “plaques” within the coronary artery is a complicated process that many researchers have studied for the past fifty years and is still incompletely understood. Simplistically, the blockages can be thought of as raised lumps of fat within the heart vessel. The fat is covered by a thin layer of cells and if a break develops in the cell surface, the body is “fooled” into thinking bleeding is occurring and a clot forms within the vessel. If blood flow stops, heart muscle beyond the blockage does not receive blood and the patient can develop a heart attack and in some cases abnormal arrhythmias. A simple way to think about this is a large river with a number of branches. Damming the river prevents water from flowing downstream and any crops or plants that depend on this water will wither and die quickly.

What are some warning signs that suggest that you might be having an arrhythmia with exercise? Some lightheadedness can occur at the end of a particularly strenuous workout but this sensation ought to pass quickly. When someone passes out at peak exercise, this can be the sign of a severe arrhythmia. In addition, the sensation of an abnormally fast heart rate that doesn’t slow down after exercise or is associated with discomfort may represent an arrhythmia. Sometimes people will “feel” their heart beating abnormally- either irregularly or too fast- this sensation is often called “palpitations.” This may be of no concern but could also be due to an arrhythmia. Chest pain with exercise may be a sign that your heart muscle is not getting enough blood, perhaps due to a blockage in the arteries that supply blood to your heart.

If you are having any symptoms that you are unsure about, see your physician. Depending on the concern they might order a test such as an echocardiogram, CT scan, or MRI that provides images of your heart, or perhaps a stress test that allows the physician to evaluate your heart response to exercise. If the physician is concerned about an abnormal heart rhythm they might ask you to wear a monitor that records the electrical activity as you exercise and do other activities during a day or week.

Exercise is an important part of a healthy lifestyle. It can improve your heart function and studies have shown that exercise is useful for reducing the risk of death. When you are exercising “pay attention to your body” and ask your physician questions if you have any concerns.   Remember when starting an exercise program start slowly and, if you have a heart problem, speak to your physician before starting. Enjoy exercising and I will see you out there!

Figure 1: A picture showing blood flow in the body. Unoxygenated or “blue” blood is pumped by the right side of the heart to the lungs and the oxygenated “red” blood is pumped from the lungs to the body. Reproduced with permission from Kusumoto and Bernath, ECG Interpretation for Everyone, Wiley-Blackwell 2012. 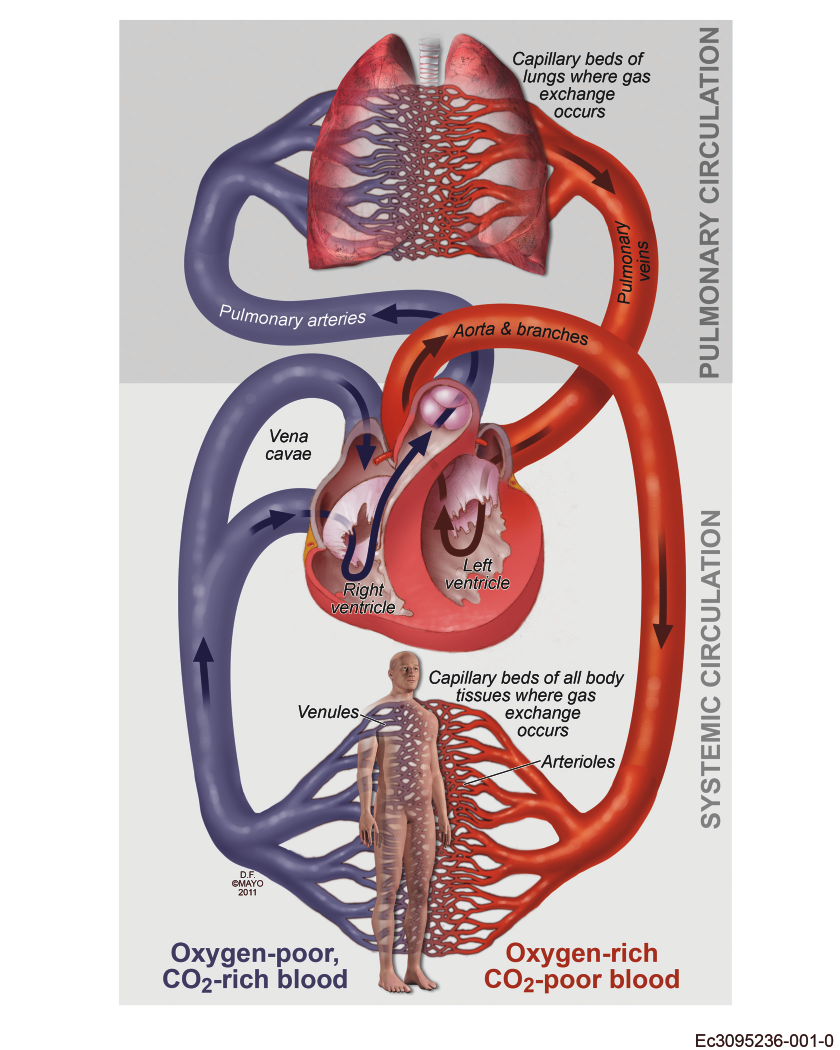 Figure 2: A picture showing how a heart attack develops. The coronary arteries supply blood to the heart (no different than the carotid arteries in your neck that supply blood to your brain). Within the artery, a lipid plaque filled with cholesterol can tear and lead to a blood clot (called a thrombus in medical terms). Blood flow to the region of the heart supplied by that vessel stops and a heart attack (shaded area) develops. Cardiologists can quickly open the blocked artery to reestablish blood flow and abort a heart attack. Reproduced with permission from Kusumoto and Bernath, ECG Interpretation for Everyone, Wiley-Blackwell 2012. 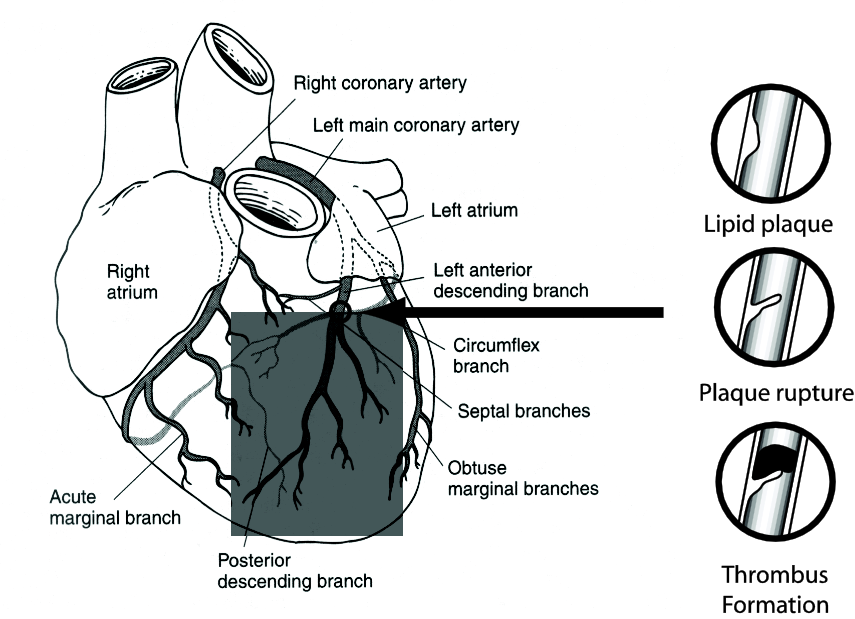