From Ironwoman to Mom Susan Wallis does it all 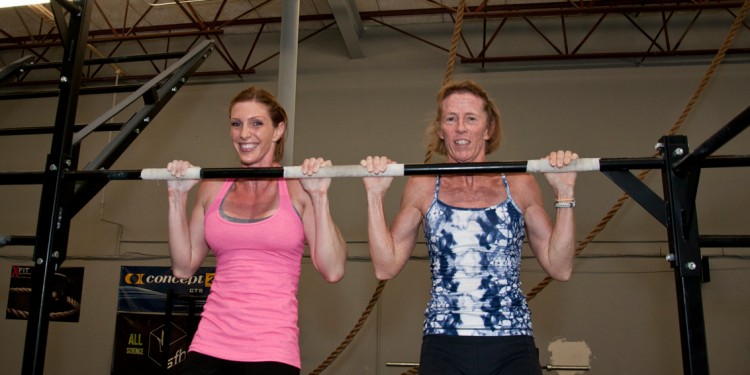 There are two sides to Susan Wallis. One is a competitive athlete that rips through Ironman races and pumps iron in CrossFit workouts. This Susan has participated in 36 Ironman races, dozens of marathons, and recently completed 106 burpees to place first nationally in the March CrossFit Open competition.

The Ironwoman side of Susan started when she ran her first 5k at the age of 30. She qualified for the Boston Marathon three years later and has ran at least one Ironman competition a year since the age of 39. In 2009, Susan started using CrossFit workouts as cross training to help improve her triathlon times. She currently has arthritis in her knees, so she uses CrossFit as a low-impact alternative to running to stay in shape for the impending triathlon season. She currently attends CrossFit workouts three to five times a week and swims and bikes on the other days.

“Out of swimming, running, biking, and CrossFit, I don’t really have a favorite workout,” Susan says. “I approach each one of them as important and there is a purpose to them.”

The other side of Susan is a softer side. She is a mother of two and the oldest of four siblings—all girls. Susan grew up in Jacksonville, Florida and attended Bishop Kenny High School, back when the boys and girls classes were segregated.

“I went to Bishop Kenny when there was no air conditioning and when the girls wore wool skirts and slips,” Susan says.

“We started dating senior year after a Terry Parker-Bishop Kenny basketball game,” she says. “Our first date was at Burger King because that’s where everyone hung out.”

Susan lost her husband, Mike, tragically when he disappeared on an island in Hawaii three days before an Ironman in Hawaii. Susan, though deeply grieving, recalls that she made the decision that she couldn’t sit there crying into her pillow and still completed the Hawaii Ironman in his memory.

“I had a friend run the race with me because part of the course went to the area where he was last seen and it was really hard for me to go there,” she says.

Nonetheless, she finished the race. To further commemorate Mike, their daughter Chrissy was married in Hawaii last year.

Susan and Mike raised their children to live healthy, athletic lifestyles. Both Chrissy and her brother John continue to be athletic today, but it is Chrissy who introdcued Susan to CrossFit when she opened up her own gym with her husband, Rob: Jax Strength and Conditioning. Chrissy said that her moms alaready athletic build became even more chiseled with the CrossFit workouts.

“Her proportions are different now,” Chrissy says. “She has a lot more muscle mass in her shoulders, her legs are ripped, and she has a ridiculous six pack.” 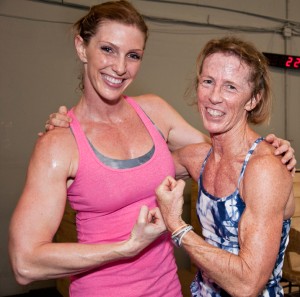 Chrissy is just as active as Susan, competing in triathlons, marathons, ocean lifeguard competitions, and even a 12.5 mile swim around Key West. Chrissy grew up involved in competitive swimming and volleyball, and continued to stay athletic after graduating college.

Chrissy says that she has never even imagined what an inactive life would be like because for as long as she can remember, her mother was active and had Chrissy and her brother John participate in sports.

“I took growing up around sports for granted,” Chrissy says. “Growing up, my mom would always work out during the day. I just assumed that’s what all parents did.”

Now, Chrissy and her mom do what they can to help the local community stay active and healthy. Chrissy, who also works as a real estate agent, runs her CrossFit facility, and offers a special CrossFit class for beginners called “On Ramp.” The class helps beginners learn the fundamentals of weight-bearing exercises and form before entering the
mainstream classes.

In 1999, Susan started the largest triathlon club in Jacksonville, the Hammerhead Triathlon Club, a USAT sanctioned team, which now has 200 members. Susan says that the team helps to bring members of the community together to train in a team environment and get better educated in training and nutrition.

Although Chrissy and Susan are extremely close, they are also very competitive come race time.

“My mom is older, but she can still smoke me at running,” Chrissy says. “I can rely on my past skills that I gained from competitive swimming to win the swimming portion, but lately, she has been more conditioned so it would be pretty close.”

Regardless of who wins the next triathlon, Susan will continue to train as she has been and is already looking forward to next year’s CrossFit Open Competition.

“Next year, I’ll advance to the next age group since I’ll be 60,” Susan says. “This year, I would have ranked in the top 20 if I had been in that higher age group, so I’m looking forward to the possibility of making it to the CrossFit Open.

Retaining water? Your body might be trying to tell you something!!!