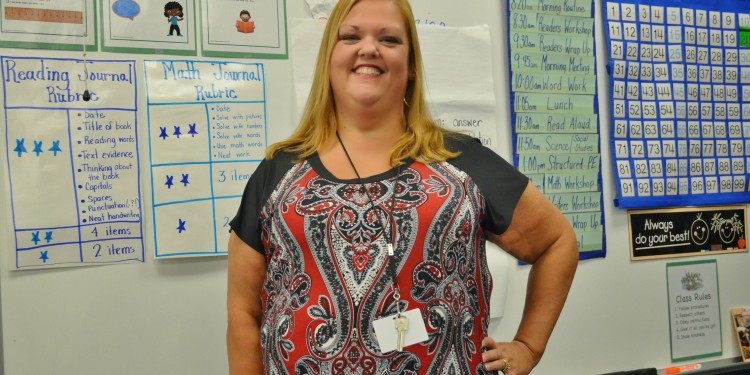 How many of us identify with our passions? I am a runner, we hear people say. It doesn’t seem to matter how muddled our lives become with careers, relationships or children – we always have that title “runner” as a touchstone. It brings us purpose. But what happens when we identify with a hopeless sentence. I am fat, we hear people say. It’s a label that more than one-third of us identify with in the United States. Being overweight is an identity that locks some out of possibility. Not others.

Holly Strickland changed her “I am” statement, with momentum, inspiration and love.

Holly’s been overweight her whole life. In the seventh grade, she lost a lot of weight, but when the boys started paying attention to her, she got scared. She was used to being invisible. She couldn’t handle the attention, so she gained the weight back plus more. After the birth of her son and her mom’s diagnosis with brain cancer, she began eating to deal with emotional distress. When her mother passed away in 2004, she weighed 340 lbs. She made a promise to her mom that she would get healthy and take care of herself.

Holly was diagnosed with Diabetes at that time. She recalls, “I always hated going to the doctor! No matter what I would go for, the answer was always LOSE WEIGHT. All I was in their eyes was fat! I left far too many appointments in tears.” Holly contributes her change of heart to her current healthcare practitioner, Susan Smith, NP. “When I first met Susan, I finally felt like she saw me as a person! She was compassionate! She told me that now was the time for me to change. When I do make positive gains, she is very encouraging and supportive. I want her to be proud.”

Holly finally did make a change, along with her husband. Together, they vowed to lose weight so they could be healthy for their son, who has seizures and needs special care.

In February 2013, Holly’s sister in law encouraged her to try the Couch to 5k (C25K) app on her phone. “It was always my secret dream to run a 5K. So I tried it the very next day!” At first, 60 seconds of running, 90 seconds of walking for 20 minutes seemed impossible! “I made all kinds of noises while running! However, I’m very stubborn and I wouldn’t quit until the voice on the app said to stop.” Holly remembers.

Holly has lost over 51 lbs since January, and she’s motivated to do more. “My life is so different now! I can’t wait to see what else I can do!” She’s training for the Disney Princess half marathon in February 2014. Her goal is to weigh 145 lbs.

While the number may not be her identity, she can now call herself a runner. It brings a sense possibility and accomplishment that moves her to give the following advice: “Try the C25K app! You will be amazed that you can do it! Imagine crossing the finish line…it is an indescribable feeling!