YOU ARE HERE:Home » Blog » If I can run a 5k, anyone can
BlogLocal Inspiration 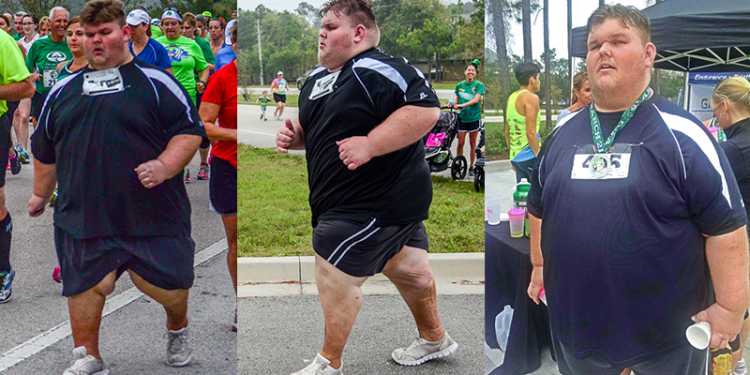 A message from Grant Gunderson,

“Never in my wildest dreams did I ever think that I’d pay a single dollar to wake at the crack of dawn to get all sweaty and go run. But you see, it’s that mindset that’ll keep you there for as long as you let it.

Three days before Christmas 2014, I had gastric bypass surgery. Throughout the entire process up until I was taken into to the operating room, my face looked like it had seen one too many ghosts and there were millions of goosebumps all over my skin.

Fast forward to just a week shy of the 5-month mark, here I am having lost 145 pounds, 12 inches off my waist and no longer using a Bi-Pap machine at night. But something happened in-between those 5 months–something special. As I saw the number on the scale decrease, I noticed that my level of comfort in my own skin increased. In blatant terms, I started to love myself. I was embarking on a long journey that would include a plethora of changes. It was in that moment of realization that I decided I–for the first time ever–was going to pay money to run and that’s exactly what I did. I ran my first 5k on March 21st 2015.

While I wasn’t the first one done, what matters is that I kept that promise to myself and more importantly, I finished without stopping for a second. At the end, while my body was feeling pretty sore and ancient, inside, all I could feel was pure happiness.

Call me crazy, but I’m doing it again, I’m paying money to run and I want YOU to do the same. If you’ve never, ever taken part in a 5K, register for the Celebration 5K on Independence Day and I want you to do it with me. I’ll see you at the starting line and be at your side all the way to finish line.”

All too often we fail to attempt the things we want to do for the fear of being last. Grant was the last person to finish the race that day and there’s a good chance he will be the last one to finish at the Celebration 5k but he’s not letting that stop him. Celebrate not only our country’s independence July 4th but also your personal independence and ability to make a difference in your own life. If you’ve been wanting to do a 5k but have let fear stop you, put that to the side and accept Grants invitation.

Jacksonville may soon have its own track team!

Tri to Be Fit: A Beginner’s Guide to Triathlons