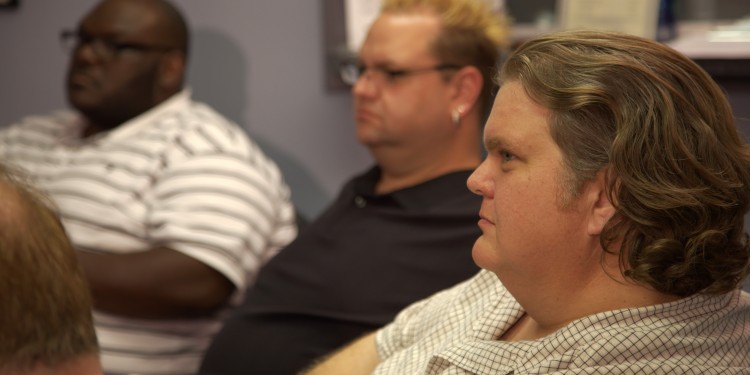 As we moved into our third month of filming “It’s Huge: The Documentary”, we saw a lot of progress in many areas for our five brave men on their journey to lose 100 lbs. or more in one year. Being closely monitored by a team of professionals can be stressful but also helpful. It’s common knowledge that weight loss is difficult and some months go better than others but when a documentary is being filmed – you have an entire film crew recording your success and some times your disappointments. We saw some big moves in numbers on weight loss this month, with some men reporting as much as 28 lbs. since we began in May. But it’s not a race or competition and every single ounce is a step in the right direction to health.

It’s exciting to witness everyone involved making progress at his own pace and feeling better. There is often a lack of compassion on behalf of the general public as to how the experience can be daunting especially when weight loss slows or just stops. The key is to keep going, no matter what and not stop. Our hope in this project is to find a formula to help anyone trying to lose weight whether it’s 10 lbs. or 200 lb.

In June, the American Medical Association announced that Obesity is now considered a disease. This led to a lot of media and public attention for our film including my being interviewed for TV, radio and newspapers. It’s great to see the word get out about this project and hope to inspire others to renew their weight loss efforts. Many people are sharing on Facebook and social media that the film is inspiring them in their health efforts. This is exactly what we HOPED would happen.

We are very fortunate to welcome Dr. Timothy McCormick to our professional team this month. His vast medical knowledge of the disease of obesity and his compassionate nature make him ideal for this project. He and his staff did medical testing on all the guys and used an “In-body” machine to measure many aspects of weight, muscle and water content in the body. They were able to help the guys by identifying things like low Vitamin D levels and high insulin levels that would not show up in a simple blood sugar test.

“It’s exciting to be part of this project. Obesity has long been regarded as due to a lack of willpower or laziness, but it is a multifaceted medical condition. Our goal is safe weight loss with long term results.” Dr. McCormick said. The project aims to follow the men and team for a year but the hope is that the changes they learn are permanent and the weight doesn’t return. Estimates for weight loss effort success are very discouraging at about 20%. For these changes to last for a lifetime we are using a multifaceted approach involving many aspects of life change including nutrition education, exercise, mindfulness and even therapy.

There is no miracle quick cure to weight loss but sadly many people get ripped off thinking there is. “We want to change lifestyles by changing approaches to eating and improving a person’s physical fitness and activity tolerance. “ Dr. McCormick added.

Next month we will be focusing on mindful eating, healthy cooking and increasing exercise efforts. We will keep you posted on our progress.

To find out more about the project or follow us online go to www.itshugedoc.com.