Jacksonville may soon have its own track team! 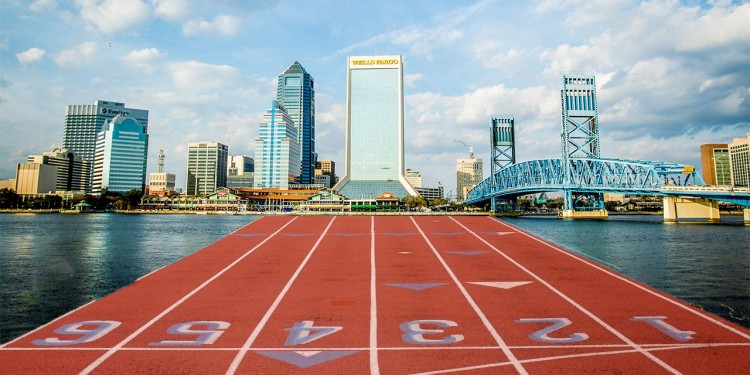 Jacksonville is one of eight cities being eyed to have it’s own track team. Paul Doyle, sports agent to several track stars such as Lolo Jones, originally launched the American Track League in Atlanta has a vision of having an eight-city track and field league. Other cities in discussion include Atlanta, Boston, Richmond, Charlotte, St Louis, Sacramento and Portland.  Similar to other professional sports the league will have a draft that would take place February 2016 if all goes as planned.

The American Track League will be a series of international caliber track and field meets throughout the United States. The meet structure is designed to be quick and exciting with little lag time between events and with live music played throughout the meet. The traveling house band of the meet series is the Boston based Velveteen Playboys, led by front man Paul Souza. The feel of the meet will be much like that of a track meet within a rock concert.

The seating design in the various stadiums will allow for post-race interaction between the athletes and their fans. For field events competitions, the fans will be invited down to the competition areas to get up close and personal with the athletes. This format ensures a very unique athletic experience for all fans.

Meets with a purpose

The main goal of the track meets will be to promote the importance and raise the awareness of the childhood obesity epidemic that is affecting children in today’s society. World Class athletes will visit schools in each city to promote the importance of a healthy and active lifestyle. Children in surrounding communities will be invited to attend the meet free of charge. Community events such as children’s races will be conducted in conjunction with the meet. Other on site events and activities will allow kids to be active throughout the meet.

Although there have not been any definitive discussions with the city, Dave Herrell, Jacksonville’s sports and entertainment officer says, “I’d like to get a feel for their business plan first and see what kind of base they need to make it financially solvent. In my opinion, I think Jacksonville is a viable market, and from a sports perspective, we certainly have a lineage here.”

For league or team sponsorship inquiries you can contact the American Track League here. http://americantrackleague.com/contact/

Sweating for the Next Generation - Marathon High