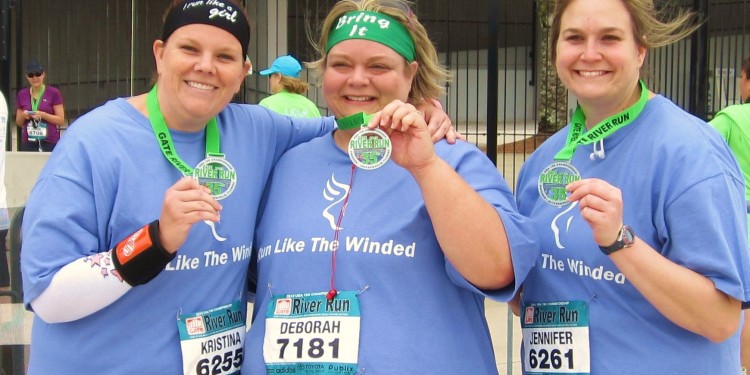 For the “streakers,” this year’s Gate River Run was their 35th time. For Deborah Rogers, who six months ago could not run more than ten feet, it was her first.

Deborah Rogers has only been to the Gate River Run twice. Last year, she participated as a volunteer and handed out medals. This year she attended the race as a participant and crossed the finish line to receive her very first official Gate River Run time.

The Gate River Run is not a new concept to Deborah. A Jacksonville native and a Gate Petroleum employee, Deborah has grown up in the backyard of the nation’s largest 15K. It’s something she had always heard of, but never thought she could do.

When Deborah volunteered in 2011 and handed her best friend a medal as she crossed the finish line, she decided that, “If she can do it, I can do it.” That’s when she put her plan into action.

Deborah says that finishing the race was incredibly rewarding, but that getting started with her training was not easy. She had several obstacles she had to overcome before she could even run a mile.

As a child, Deborah had always been overweight. She played volleyball and other sports in school, but still struggled with her weight. When she graduated high school and started college, sports opportunities were no longer available to her and her full-time job took over what little free time she had. As the years passed, Deborah’s life became more focused on her family and career, and she continued to gain weight. As a wife and mother of an 8-year-old boy, she stayed active working in the yard and doing housework, but no longer took time out of her schedule to exercise.

This year, she attended the race as a participant and crossed the finish line to receive her very first official Gate River Run Time.

When Deborah made the resolution to complete the 2012 River Run, she started to take steps to improve her health. In June, she began seeing a nutritionist, which placed her on a 2,000 calorie per day diet. Between June and October, Deborah lost 10 pounds.

Knowing the River Run was just around the corner and wanting to see quicker results, Deborah started running in October. She pulled the trigger by signing up for a 5K race.

Deborah started her training with a group of friends by walking and running. She made a resolution to run one race a month. Between October and December, she lost 15 pounds.

“I wanted to be able to take in the moment without being depleted,” Deborah says. From December to March, Deborah lost 35 more pounds.

When day of the Gate River Run arrived, Deborah was ready. She had completed a nine-mile training run prior to the race, had run the entire way, and she knew she could handle it. Although on the day of the race, Deborah hurt her foot shortly after completing the first mile, she still persevered and finished the remaining painful 8.3 miles.

“I didn’t have any specific thing I wanted to accomplish other than to finish,” she says. “It was an amazing experience and was not a decision I regret by any means. I really enjoyed the whole route—the bands in the street, the adrenaline in the crowd. You just feed off the adrenaline. It certainly made the miles just fly by.”

Although Deborah has lost almost 50 pounds since starting her lifestyle change last June, she says her journey is not over. She’s already making plans for next year. “I’ll definitely be back,” she says.

If you have a similar story you want to share with us, send us an email at contact@904fitness.com.

Advice from a foxy mama