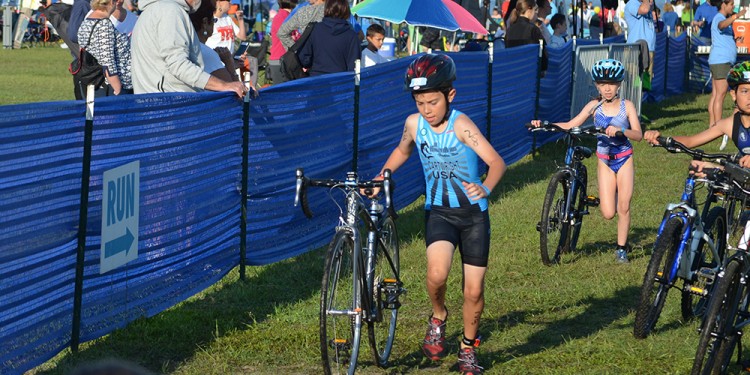 What can motivate kids to leave behind technology and video games and become more physically active? How about signing them up for not one but three sports – Kids Triathlon!

Local brothers, Steven Cartwright, who just turned 10, and Philip Cartwright, 6, compete in kids triathlons throughout Florida. This year is Steven’s third year participating in triathlons and the new bike he got for his birthday will come in handy in his next competition.

904F: What is your favorite leg of a triathlon?

Steven: Mine is the cycling part. I like to go fast.

Philip: My favorite part is running. I like to catch up and pass someone right before the finish line.

904F: If there was one rule in triathlon you could change, what would it be?

Steven: I wish drafting was allowed in all races. (note: some kids tris do allow drafting but not all of them)

Philip: That all of the running is flat – no uphill running!

904F: What is the silliest thing you’ve seen happen in a race?

Steven: Trying to give water to people on bicycles but they were going too fast. Then the water was on the wrong side of the road from where the runners were.

904F: Philip, why do you have a toy hedgehog strapped to your bike? That seems silly!

Philip: Actually, that is so that I can find my bike easier. I was in a race and there was a bike exactly like mine. I needed my bike to stand out so I put my hedgehog on it.

904F: Mom, who is more competitive, the kids or the adults? 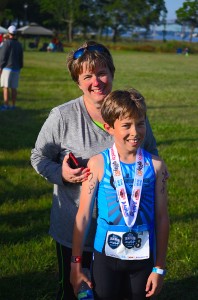 Mom (Melodie Cartwright): My husband and I are both competitive, so to a certain extent they get it from us. Steven
does not show any nerves going into a race, he’s very confident like his father. Philip gets the jitters and just wants the race to start, then he throws himself into it. They “race to place” and prove to themselves that they can accomplish more than they thought they could.

904F: What do you think you can do better than an adult?

Philip: The bike – I am better than my mom.

904F: What do you think about all of the different bikes that kids ride in these races? Like girls on Barbie bikes?

Steven: I think it’s great that kids can show up with any type of bike for the race, like a mountain bike if that’s all they have. They should all be able to race.

Triathlon training started back up in the Spring for these young athletes with the Junior Hammerhead Triathlon team (jrhammerheads.com). A variety of training programs keep Steven and Philip focused on improving their swim, bike, run and transition times for upcoming races. The Groundhog Day drills – swim-bike-run repeats – are one of their favorite drills.

While their parents appreciate the discipline of individual sports, in balance with a team sport, learning self-reliance, focus and responsibility, Steven and Philip especially appreciate another aspect of the sport – the trophies!

Brandi Acree - On a New Road