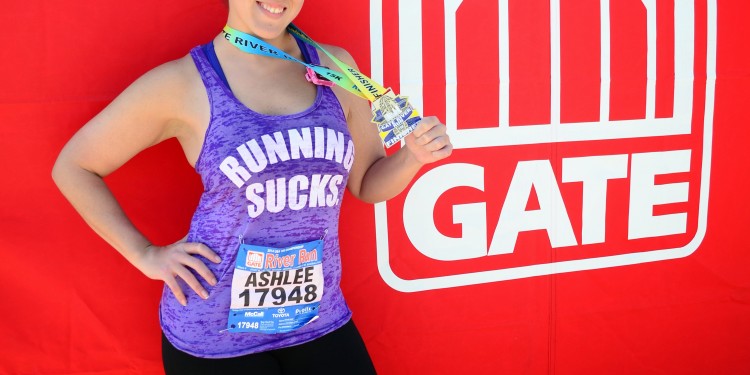 Looking back over the last 5 years and the missing 100 pounds, Ashlee Hunt knows that she doesn’t ever want to go back to the person she was. It wasn’t until she saw herself tagged in a Facebook picture that the reality of her size sunk in. Right then she realized that she was the only one who could change the situation.

Like most of us, Ashlee’s journey started in the gym with enthusiasm.

Her motivation evaporated a few months later when she relocated, changed gyms and lost her workout buddy. It wasn’t until a friend recommended diet changes that she started losing weight and felt renewed to take up exercise again. Twenty pounds lighter, she continued to exercise regularly, following a routine that sounds like a gym rat’s dream: group fitness classes, spin class, even becoming a certified spin trainer. Soon she began to run and has competed in 5ks, mud runs and a 10K. Finishing the Gate River Run is a new accomplishment she can claim in 2014. Exercising isn’t just about losing and keeping off the weight though. It’s about fighting a disease called Mixed Connective Tissue Disease (MCTD), which causes chronic joint pain. The discomfort eases when Ashlee stays active and maintains her weight.

If It Was Easy, Everyone Would Do It

Staying motivated can be as hard as getting started in the first place. Ashlee admits the progress she has accomplished was gained not only through exercise and discipline, but through anger, isolation and tantrums. Her lifestyle changes have extended to eating habits also, helping Ashlee achieve weight loss, joint pain relief and overall comfort in her own body. She still considers herself a work in progress but holds her head high with confidence.

What’s Your Company Doing for Its Wellness Program?