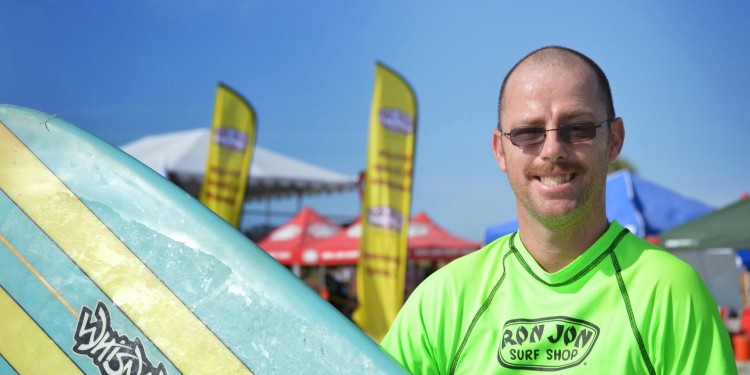 Swimming, Surfing, Soccer and Flag Football. Those are Jonathan Dutton’s sports, and he’s excelled in all four. Jonathan is a 37-year-old Special Olympics Florida – Duval County athlete. He’s been an athlete for most of his life.

His swimming coach, Linda Waarum, has known him for 25 years, “The growth I’ve seen, not only in his age, but in him, has been amazing. He’s always a hard worker. Never fussed or said he was tired. When he was younger, he was one of the fastest. Now, it’s his leadership that has grown over the last 5-6 years.”

Having been successful in the pool, earning too many medals to count, Jonathan has decided coaching is the next logical step for him.

Warrum agrees, “As an older adult, he has been reaching out to everyone. He works very well with the autistic swimmers; he has the patience needed to work with that type of athlete. His stroke knowledge makes him a natural coach.”

When Special Olympics Florida – Duval County introduced Surfing in the summer of 2009, Jonathan immediately signed up. Taking his success in the pool and transferring it into the ocean seemed like a good move, except he didn’t know how to ride a surfboard. Being a natural athlete, he didn’t have much trouble learning. Several medals later, including a Gold at the 2013 Surfing Championships in Cocoa Beach this past September, Jonathan continues his quest to learn more tricks. His next challenge will be Stand Up Paddle in the summer of 2014.

When Jonathan isn’t competing in the surf, or coaching at the pool, he works 25 hours per week for Publix Supermarket. Publix is a statewide supporter of Special Olympics Florida, and employs many athletes across Duval County. Jonathan began his career at Publix 17 years ago at the Neptune Beach location, and is now a custodian and bagger at the Merrill Road store. Even at work, Jonathan is a Special Olympics advocate. Every January, Jonathan sells paper torches during the Publix Torch Campaign. With Jonathan’s help, Publix donated over $45,000 to the Special Olympics Florida – Duval County program in 2013.

When spring rolls around, Jonathan plays on a 5-a-side Soccer team for Special Olympics. Playing both offense and defense is what keeps him energized. Players have their own superstitions, and Jonathan is no different. He can’t play without an extra sock on his right foot. He believes it helps him kick better, and keeps the blisters away. In the fall he plays Flag Football, and in 2013 he was voted Captain of his team. Eventually, he’d like to coach both Soccer and Flag Football.

Jonathan admits he can’t read very well, but is willing to accept help when it’s offered. He’s never let his intellectual disability slow him down, though. He lives on his own with another Special Olympics athlete, rides his bike to work, and has a garden in his backyard that grows jalapenos, string beans, onions and peas. Before a competition he fuels up with bananas, grapes and Gatorade. His post-workout meal is “anything with red meat.”

The mission of Special Olympics Florida is this: to provide year-round sports training and competition in a variety of Olympic-type sports for people with intellectual disabilities who wish to participate, giving them continuing opportunities to develop physical fitness, demonstrate courage, experience joy and participate in the sharing of gifts, skills, and friendship with their families, other Special Olympics athletes, and the community. The ultimate objective of Special Olympics Florida is to help people with intellectual disabilities participate as productive and respected members of society at large, by offering them a fair opportunity to develop and demonstrate their skills and talents through sports training and competition, and by increasing the public’s awareness of their capabilities and needs.

Jonathan is the mission. He is the perfect example of how sports can teach more than just how to kick a ball. He is learning life lessons that overflow into the work place, as well as how to coach other athletes.

A 10-year-old girl once said to me after meeting Jonathan, knowing he has an intellectual disability, “What’s wrong with him? He seems perfectly normal to me.” If normal means active, healthy, strong, confident, helpful and dedicated; then yes, Jonathan is very normal.

Coffee for Me, Coffee for You. Run for Me, Run for You.