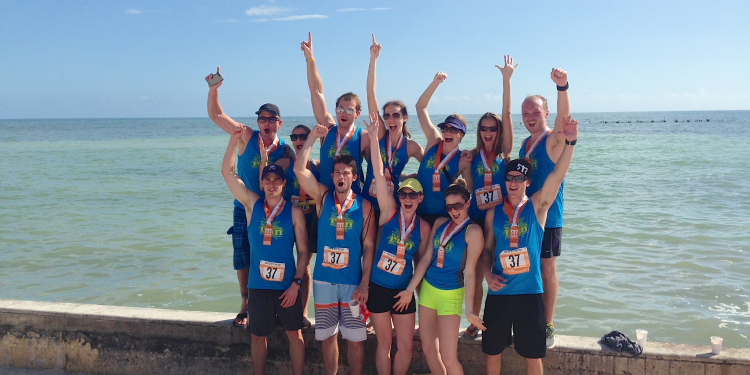 While running and traveling are nearly synonymous, Ragnar Key West offers you and your closest running partners a chance to see 192.6 miles of Florida scenery on foot.  Ragnars are long distance relays staged over 2 days and 1 night, generally run by teams of 6 or 12.  Each runner completes a few miles while teammates crew and ride along in a van.  The events are festive and usually unforgettable running vacations.

What was your favorite part about the run and why?
Ragnar Florida Keys was the first team relay I’ve ever done and it was an amazing experience! To work together with your team of twelve to run various legs all the way from Miami to Key West over a two day period was such an accomplishing feeling. Never do you get to see Florida in that way.

What makes this run different than other runs?
For me, running is typically a solitary activity. Ragnar turned it into a team event full of camaraderie.  With each of my relay legs, I pushed my pace for the team.

What was the most difficult part about the run and why?
The heat.  Even though we were required to wear safety vests and lights, I looked forward to the late night and early morning legs because of it.  Running in the middle of the day was rough, especially during your last leg, on little sleep, and only surviving on a couple meals, fruit, trail mix, granola bars, and bird seed crackers.

What inspired you to do this run?
And would you encourage others to do it, and if so, why?
I loved the fact that this run was such a team effort.  I feel that most races are such a solo effort.  It was really fun to be a part of a team!  My favorite part of the run was the point where both vans met up to exchange the bracelet.  It was really fun to share the experiences both vans had throughout the run.

Not Just A Diet