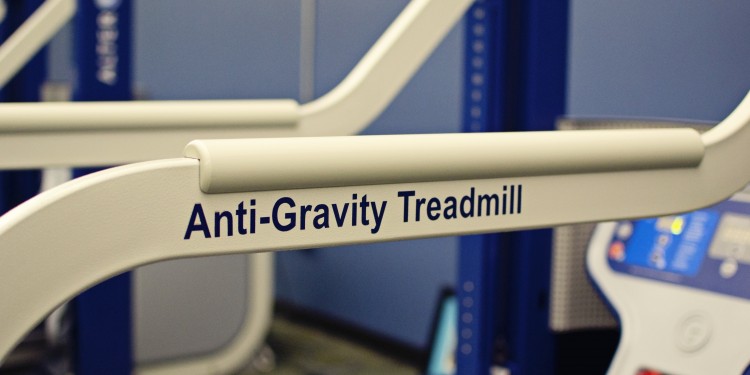 Fifteen years ago, Bob ran at least 60 miles a week—until knee surgery derailed him. Since then, he’s been afraid to do anything except swim or walk, but he’s desperately missed his runs.

Sharon has suffered from plantar fasciitis for years. An avid runner herself, who competed in races on a monthly basis, she, too, gave up her favorite sport out of sheer pain.

Until recently, Northeast Florida residents, like Bob and Sharon, had to rely on physical therapy and/or medication to help them recover from injuries that kept them from their favorite workouts. But thanks to AlterG Jax, athletes of any level with virtually any type of of injury can not only return to what they love to do but rehabilitate themselves in the process.

Opened in late 2011 by running coach and owner of Personal Running Solutions Paul McRae, AlterG Jax is a San Marco gym that caters to individuals like Bob and Sharon, as well as anyone looking get a cardiovascular workout—without the impact that goes along with running on traditional treadmills or on the streets.

“There’s no question that the body takes a pounding when you’re running. Even for people who don’t have injuries, the feet, knees and hips are subject to significant impact,” Paul says. “The AlterG enables people to run in a way the reduces the impact and stress on the body while still maintaining their natural gait.”

Dr. Robert Whalen originally conceived the idea of differential air pressure technology to help NASA astronauts exercise and prepare for missions. In 2008, the FDA approved the Alter-G as a medical device for the rehabilitation of lower extremities, treatment of neurological conditions, weight loss, aerobic conditioning, and an overall workout to combat diseases associated with the aging process.

In layman’s terms, the AlterG is an anti-gravity treadmill. Users put on specially-designed shorts, then step on the treadmill into the “cockpit.” Once the AlterG is aligned with the users’ hips and they are zipped in, the cockpit, which is now sealed, fills with air creating a bubble. The machine then calibrates the air to the users’ weight allowing them to adjust the percentage of their body weight at which they want to run—the lower the percentage, the lower the impact.

In addition to controlling their weight, users can adjust the speed, up to 12 mph, and incline, up to 15 percent. AlterG Jax’s facilities also include four cameras and on-board monitor so users, as well as Paul, can watch their running technique from all angles.

AlterG Jax isn’t just for experienced runners or individuals recovering from an injury, however. Individuals just getting started in a running program or those who want to improve their performance will find the anti-gravity aspect enables them to run farther and faster than they currently do, which, in turn, enables them to build endurance while fine-tuning the mechanics of their running. For beginners, it also allows them to learn proper running techniques while building self-esteem.

“One of my new clients, who joined the gym to lose weight, was so excited to tell me that she had just run six miles on the AlterG, further than she had ever run before in her life,” Paul says. “It’s so great to see people’s faces when they’re on the treadmills, like they can’t believe what they’re able
to accomplish.”

Of course, Paul doesn’t expect you to believe him—or even his clients—about the benefits of the AlterG training. Paul says individuals really need to try it for themselves to fully understand and appreciate what the AlterG can do for them.

Paul McRae has competed for 15 years as a professional runner, including competing in the World Mountain Running Championships and the 2002 World University Games. Paul is the owner of the Personal Running Solutions running company and training center, located at 1435 Atlantic Boulevard, Jacksonville, Florida 32207. Paul offers a free 45-minute session for anyone wanting to take a test run. For more details, contact Paul at Paul@PersonalRunningSolutions.com.

The CSI Companies, Inc.: Not your typical employee health and fitness plan

Advice from a foxy mama