The CSI Companies, Inc.: Not your typical employee health and fitness plan 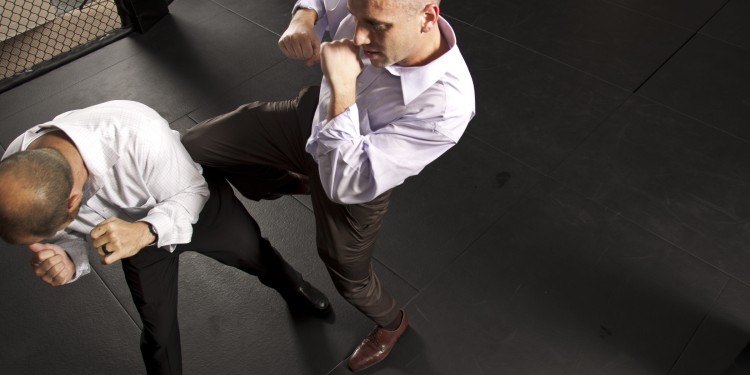 Feel the urge to put a co-worker in a chokehold?

Don’t answer that out loud… But if you’re thinking yes, you might want to consider a career at CSI Companies Inc. Every Friday at its Jacksonville on-site gym, CSI hosts a grappling and sparring session for its employees, lead by Mixed Martial Arts (MMA) fighter and personal trainer Dean Grant. This may sound like an insurance liability waiting to happen, but after watching these guys train, it’s clear that they’re here to better themselves and one another, despite the occasional
bloody nose!

The CSI recruiting team has access to their trainer three days a week on Mondays, Wednesdays, and Fridays from 10 a.m. to 2 p.m. Most of the employees exercise together and complete a total body workout that Dean creates for that specific day. The workouts consist primarily of body weight and free weight exercises displayed on a dry erase board, which Dean explains and demonstrates prior to the workout. Dean also adds an extra edge to the workouts for those who love the taste of competition by timing the participants. Though Dean is one of those guys you might see on “Spike TV” submitting his opponent with brutal rapid-fire punches, here he’s a motivator with one goal in mind–helping people improve their health.

“I knew I wanted a job helping people,” Dean says. “But after graduating from the EMT program and being forced to feed patients medicine while studying Nursing at Florida State College, I realized preventive healthcare was the only health related job I would ever be interested in.”

The entire program is built on a “work hard, play hard” mentality that serves as the slogan participants proudly wear on the back of their workout t-shirts. After speaking with President of Professional and IT Division Chris Flakus, I learned this philosophy is more than something CSI offers its employees as an effort to increase profit margins. It’s something the company truly believes in and practices from the CEO on down. CSI also encourages clients to reap the rewards of this philosophy by inviting them to lunch workouts in lieu of after-work happy hours to learn their business.

“Dean switches up the workout every time,” he says. “I used to do a ‘traditional’ workout of one muscle group each day. Now what we are doing here is so much better.”

The most valuable thing I saw at the gym was the environment. I walked through the doors of the four-story office building, past a secretary on the bottom floor, around a corner and passed a cubicle corridor to find myself behind the scenes of the set of the 300 movie. Not that everyone was ripped like a movie star, but the stage sure was set, with rock music blaring and rubber flooring to cushion the sounds of iron plates hitting the ground.

All too often I’ve seen companies throw a treadmill and resistance bands into a conference room and call it their “health initiative,” expecting employees to line up with excitement as if they were going to be on The Biggest Loser. It’s all about the environment. That’s why very few people are successful with working out at home. Okay, okay … back to the story.

Chris said that the program has been a great success for the past three and half years with about 50-70% participation by both men and women in the office of 55 employees. I wasn’t surprised. Small details, like the embroidered CSI logo on the equipment, displayed the company’s commitment to the health of the staff.

After the CSI group finished the workout, I had a chance to speak to their trainer, Dean. He had a pretty interesting story as to how he ended up here, to say the least. He had just won a fight at an event in Georgia when a couple of CSI executives bought him a beer and asked him if he would train them to fight. Dean really didn’t think they were serious and went on to enjoy his evening. Much to his surprise, the following week he received a phone call again with a request from CSI to come train them. Realizing that they were serious about this, Dean arrived at the office a week later and was welcomed with the sight of a couple of the guys boxing in a carpeted office, with no trainer or instruction. It’s obvious that things have come a long way since then. They now have a fully equipped gym with showers and all, being attended by moms pressed for time, weekend triathletes, and many others who are taking advantage of this great opportunity to become healthier. Employee Kate Mays, a new mother, especially appreciates the time-efficient benefits the gym has to offer.

“It’s hard to find time to work out,” Kate says. Kate describes the program to give her not only an incentive to workout, but the opportunity to stay in shape while meeting the demands of caring for
a newborn.

Dean also speaks of how the workouts are sometimes utilized as a type of screening process for potential new hires. After interviewees were invited to work out, he would later be asked: “How’d they do?” Not based on how strong, quick, or in shape, but rather, how much effort they put in or how well they handle being out of their comfort zone. I thought this was a great idea! With about 180 million in annual sales and continuous growth throughout the country, all I can say is that they must be doing a lot of things right. I’d check this wellness program off as one of those things.

904 Fitness thanks the staff at The CSI Companies, Inc., Jacksonville, for having us. I will be taking you up on that offer to come workout with you.

Dean runs a few gyms around the Jacksonville area and specializes in unique strength and conditioning programs. He trains higher level athletes, as well as local military and law enforcement. He is one of the only IKFF certified kettlebell coaches in Florida, a USA Weightlifting Sports Performance coach, a certified diet specialist, a Crossfit Trainer, a Crossfit Kids Trainer, and is currently studying for his NSCA certification this Spring. He is also undefeated as an amateur and professional mixed martial artist with a record of 5-0.

Dean has competed nationally and has many BJJ and submission grappling titles. He has trained at top camps around the country and has sparred and competed against some of the best mixed martial artists in
the world.

Dean is devoted to “natural” approaches to health and has a “walk the walk” attitude toward his training.

The Business of Health Wellness with Naomi Whittel

It’s About Progress Not Perfection