YOU ARE HERE:Home » featured » The Look of Determination
featuredLocal InspirationUncategorized 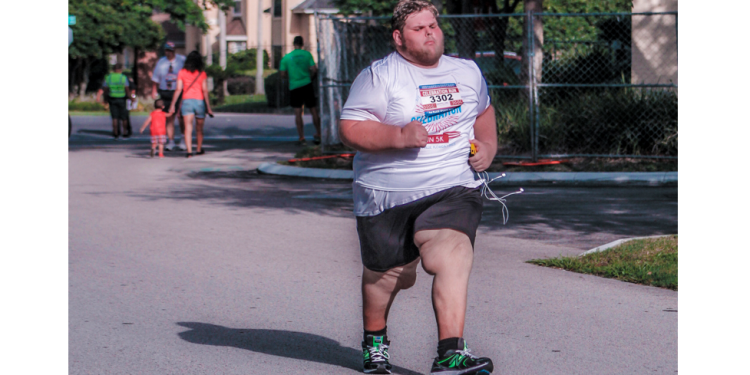 A few weeks ago, we published an article about a local individual who became an instant inspiration to us all, letting us know that if he can run a 5K — anyone can. Not only did he inspire us to make a change in our own lives, he encouraged us to do so and further encouraged us to do it with him.

On the fourth of July, Grant Gunderson took part in what became the largest 5K in Jacksonville on Independence Day, First Place Sports’ Celebration 5K — his second one to date, a mere six months after undergoing gastric bypass surgery.

To date, he’s lost 182 pounds, dropped three sizes in clothing, lost 16 inches off his waist and improved his body composition by adding nearly 30 pounds of lean muscle and going from 72 percent body fat, to 48 percent.

As impressive and beneficial to his health as all of that is, what’s equally (if not more) impressive, is his mental transformation.

“Most people would look at this picture of themselves and cringe. Then, they’d probably (don’t quote me here, but probably) want no one in the whole wide world to see it.

I however, see if through a completely different lense.

Many of us underestimate and often times place our mental health on the back burner, when in fact it should be our top priority. I’m not just talking about getting help or talking to someone you can trust about what is going on in your life (even though that’s an important part and you totally should have that one person (therapist or not) you can go to and talk about everything you’ve been bottling up)…. I’m talking about being comfortable with yourself in your own skin, having confidence in yourself as an individual.

That was always one of my biggest hurdles — I’ve never been comfortable in my own skin. I’ve never had confidence in myself to do anything that shined the spotlight in my direction. It’s still a big work in progress, very much so. But what I realized is that as I started to lose each of the 182 pounds I’ve lost in the past 6 months, I lost just as much emotional weight as well. I started to become comfortable with who I was… as the number on the scale got smaller, the amount of confidence and overall happiness in my life got bigger and that in itself is a huge accomplishment.”

After doing his first 5K, while he felt sore in a myriad of ways, Grant wanted to help encourage and inspire those who have always wanted to do a 5K, get off the couch and on the course. That being said, he took it to heart and didn’t want to disappoint, shaving four minutes and five seconds of his time.

When he crossed the finish line, Grant met a new friend and someone who could really appreciate and understand what he had accomplished. After congratulating each other, the gentleman said to Grant, “I thought I was going to catch up to you.”

Grant smiled and said, “Nah, I couldn’t let that happen.” 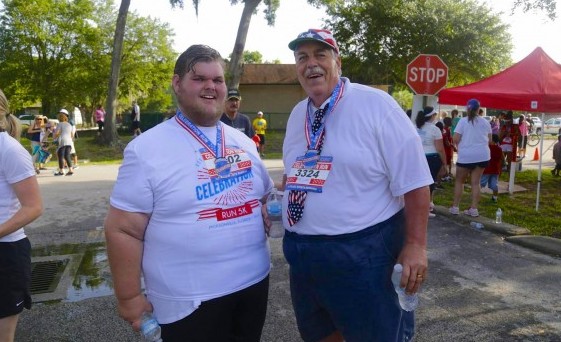 After walking in the Celebration 5K in 2013 — his first in 30 years after suffering from congestive heart failure. Brent Stake couldn’t do it in 2014 because he suffered a sudden cardiac arrest, causing him to collapse, face down in a swimming pool.

He later found out it was  an electrical problem caused by an irregular heart rhythm called ventricular fibrillation. His heart simply shut down, like turning off a light switch, and did not beat for 20 minutes. They shocked his heart 5 times and finally got a response. Three days later, he finally woke up with a new pacemaker.

The Celebration 5K was special for Grant because not only did he improve his time, but he met so many people who were touched by his story that they wanted to take part in the action. What’s really cool is three of his closest friends and even a former teacher from high school did it with him.

“To have my friends out there doing it with me, that was pretty cool. Add to that the countless people who didn’t even know me but were touched by my story and came out here… there aren’t enough hours in a day or words to possibly explain what that’s like. That is what keeps the fire in me burning.” 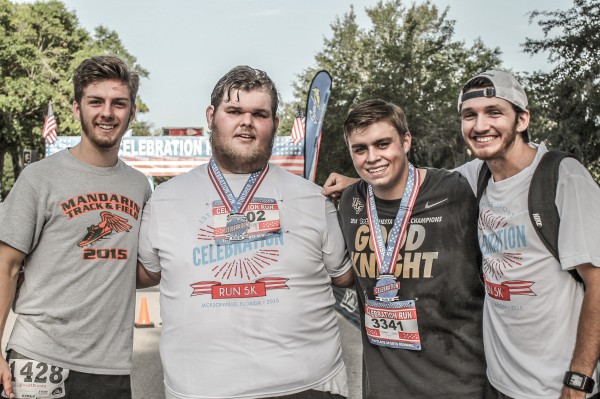 He’s done two, but he’s not done yet. The Jaguars 5K Stadium Challenge on the evening of August 15th is next on Grant’s list.

“If you’ve never done a 5K, or haven’t done one in a while. I can’t promise you that you’ll finish first… but what I can promise you is that when you cross that finish line, it will be one of the most rewarding things ever. Hearing the crowd cheering for you as you finish strong, knowing that you did it, you got up off the couch and did something you’ve never done before, that feeling is one that can’t be described, you have to experience it for yourself. It doesn’t matter where or when you finish, what matters is that you never quit and finish strong. Slow mileage is lot better than no mileage. Come down to The ‘Bank in Mid-August and I’ll show you what it’s like to keep a promise to yourself and fight through to the finish line.”