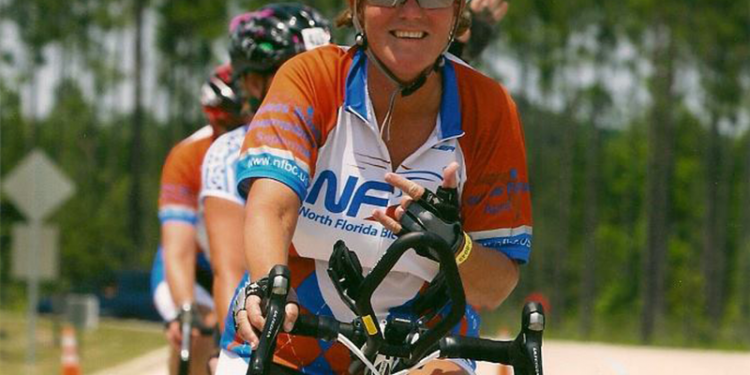 In April 2010 I decided I needed to improve my health. I pumped up the tires on my recently purchased mountain cruiser and pedaled off. After riding one mile I was exhausted. Over the next few weeks and working up to eight miles, I saw a sign for Tour de Cure! I quickly registered. This would be my motivation. I continued to train on the eight mile route in preparation for the upcoming event. On Sunday, May 23, I cycled the 12 mile Family Health Ride. I did it! Twelve miles and almost $600 in donations! This is when I fell in love with the idea of cycling. There were hundreds of cyclists and they were having the time of their lives.

I continued riding my cruiser building up to an average of 80 miles a week. I soon joined North Florida Bicycle Club with my brand new hybrid. I had high expectations to find someone to ride with that was really nice and cycled my speed. I met a large group of really nice people that cycled my speed! They called themselves “Social Riders”! The following months were awesome. I made new friends and found another in an activity good for the body, mind and soul!

While I had set simple goals for my first club year, the members encouraged and supported me to go way beyond those goals.

At Tour de Cure 2011, I cycled the century route. And it was an epic year! The camaraderie was like no other! These experiences resulted in my accepting the position of team captain for the North Florida Bicycle Club Charity Ride Team. My new goal was to serve the team with the same commitment as I gave my cycling. I wanted to see everyone with a desire to participate in a charity ride, do so with the support and camaraderie that I had experienced.

WHY I RIDE Tour de Cure…I ride to improve the lives of more than 23.6 million Americans who suffer from diabetes in the hope that future generations can live in a world without this disease. Together we can make a difference. Cycling for a cause…come ride with me!

How One Woman Uses Her Story, Her Voice and Her Health